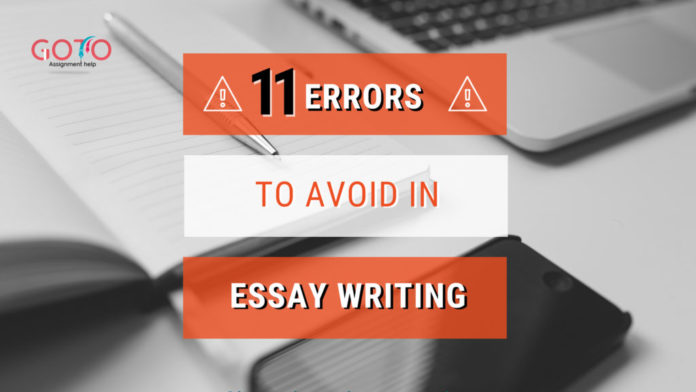 Essays are a familiar part in a man’s life. Be it school or college, there is no escaping writing an essay. You might want to rethink if you actually believe that essays will no more be part of you after your school-life ends. On the contrary, even before you get selected to a college, you will most likely be asked to write a full-fledged application essay, based on which you stand a chance to get into that particular college. Meaning, your entire future might just be based on your ability to conquer the art of essay writing. It might sound easy, but, the slightest mistakes might give you away. Thus, it is important to give attention to details to avoid too many errors, including the most basic ones- simple grammatical errors.

To Avoid These Basic, Yet Biggest Mistakes And Become The Essay Master, Follow The Few Steps That We Have Listed Below, Especially For You.

The most common kind of mistake that one makes while compiling or putting together an essay is grammatical errors and the most basic one in that lot is the tense errors. Though very simple and common, if the essay is something quite official, a tense error can make your whole writing look bad. Thus it is important to pay attention to the tenses and make sure that you follow one tense throughout the whole essay.

Paraphrasing has become so common these days that people are such masters in plagiarism. However, the paraphrasing that we are talking about here is where one converts a person’s dialogues into meaningful sentences within the essay. As we all might be familiar with, quoting a person in any piece of writing/research writing will add to its credibility, thus increasing the trust amongst the readers. However, sometimes, too many quotes might ruin the beauty of the essay. Thus, paraphrasing it into normal sentences instead of dialogues will help you retain the credibility, while not choking your article with too many quotes.

The second simplest yet commonly made error is the subject-verb agreement. Like the name suggests, it simply means that the subject and the verb of a sentence should agree in quantity or number. Meaning, if the subject is in plural, then the verb should also be in plural form. These errors are easy to spot and stand out very vividly. Thus, you must make it a sure point to give your entire essay a read to make sure everything is without any error.

The most important aim for a writer is to keep his/her reader hooked to their content and not irritate them. Imagine reading unnecessarily added words that just hand off of an essay just for the sake of being there. That might only get you the wrath of the readers. Unnecessary usage of words is what is called redundancy and you must try to avoid it the most as it comes so automatically to all of us. For instance in the place of writing biggest, you might use “most biggest” or for “simplest”, you might use “most simplest.” Words like these are worth avoiding and help in making the essay, a notch better.

One of the worst mistakes that a writer can ever do is to commit a mistake in spelling a word in his piece of writing. It might lead to a factual error, error in a person’s name, a well known place or any such thing. But what such an error outwardly portrays is your carelessness. Thus, make sure to check the spellings of every single fact, or noun that you state or any other humungous word that you might specify in your essay or writing.

When you write an essay, you have the freedom to be as ornamental as possible. You can use words that are difficult to decipher or too elegant. Thus, there is nothing wrong in going full on.

Instead of using simple and beaten down words that are very commonly used, you can use better versions of these same words- synonyms.

7. Stick the Facts and Details

In any piece of writing, it is important to stick to the original facts and details. Like quotes, facts and figures add credibility to the article that increases the trust in readers. However, writers do tend to make mistakes while stating facts misspelt words, misplaced names etc, can ruin an entire article. Hence, being careful on that side is highly advised.

One more error that is hard to tolerate, by any kind of a reader is repetitive words within the entire stretch of an essay. A reader definitely cannot tolerate reading one particular words circulated around the entire article so many times that it becomes a word kill. Some writers might do this in order to increase the word count or some, simple because of the fact that they don’t have a choice but to use it. However, in the latter case, instead of using the same word, its synonyms can be used (like one of the previous techniques).

There is always one thought that lingers inside a writer’s head even before he starts writing an article- whether to be formal or informal. While being informal can strike a chord with the common readers, it might not go well with a niche audience and informal writing, while it caters to a high-end audience, it might still come out as too boring and factual. Thus, the simple way out is to strike a balance between both. Linger between being informal and formal, that way you are being highly professional while striking a chord with the readers.

10. The Dilemma of Passive or Active

11. Sentences Those Are Too Long

One thing that you have to keep in your mind while writing an essay is that not all writers may be too comfortable with complex sentences. You might think you are, but, pulling one off and actually managing to make sense with that sentence is quite difficult. Thus, to place it safe, it is better to stick to simple and traditional sentences.

Where Can I Find Someone to Complete My Essay?